Last year I ran a retrospective with my team with the idea of identifying characteristics, attributes and/or behaviours that would benefit the team if we could display them. I asked the team to think of a person that they would like to have as part of our group, along with the benefits and attributes that having individual would bring. To help the team get started I suggested that one person that we could have on the team is Daley Thompson.

After informing some of the younger members of the team who Daley Thompson is (I must be getting old), I discussed the reasons for selecting him. As a decathlete, Daley competed across multiple events. The skills needed to complete across these events may possibly make him the ultimate ‘T-shaped’ individual. Competing across ten events also requires a level of endurance and delivery at a sustainable pace.

I then passed the baton over to the team for them to make their suggestions. The list below shows the individuals who were identified as potential new recruits for our team. 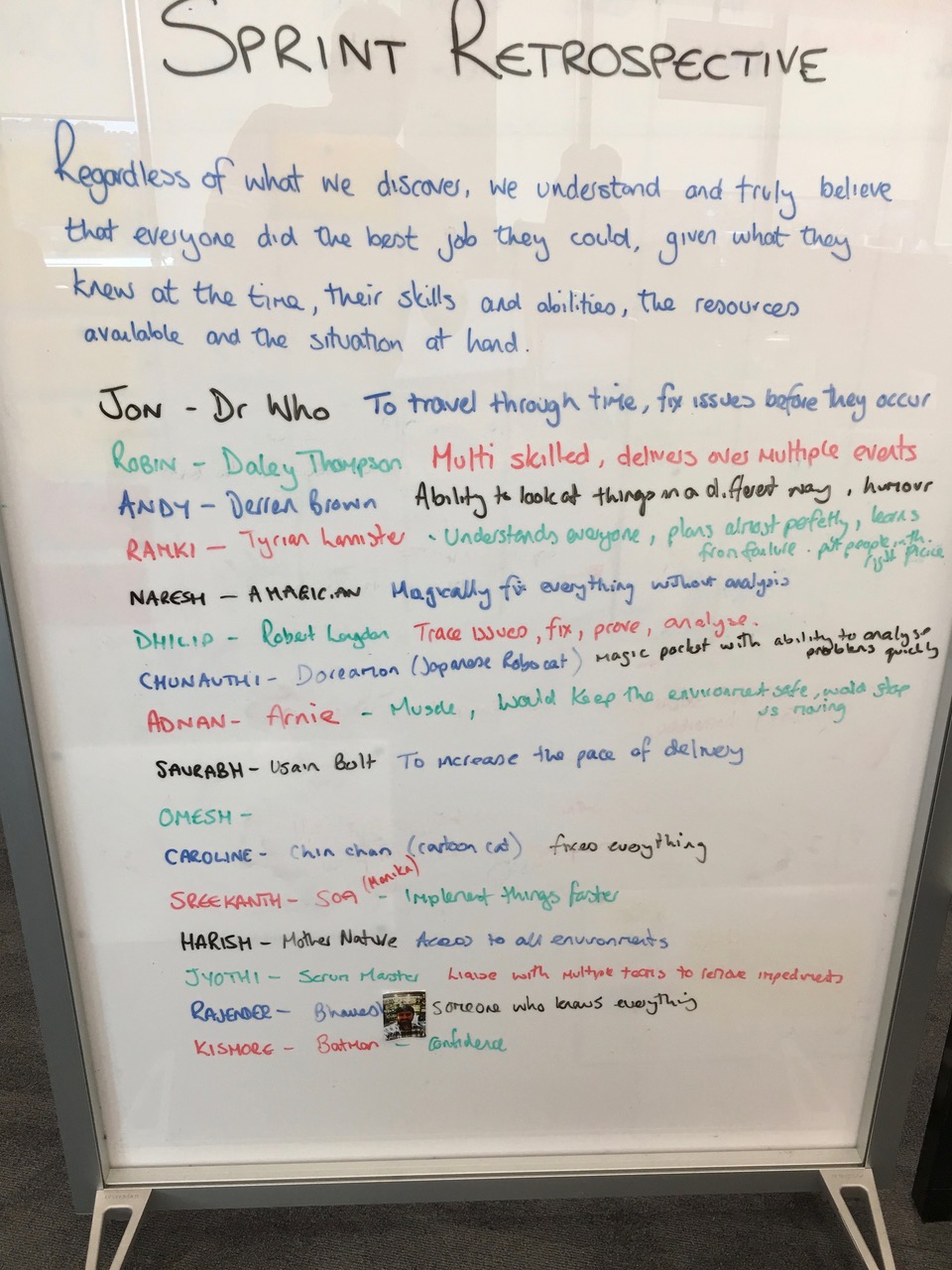 After listing potential new team members and their attributes, the team reviewed the output, with the aim of identifying actions as to how we could build these attributes into our team. Our potential new look team included some interesting characters, but there were some attributes that the suggested team members displayed that every team may wish to aspire to.

One member of the team suggested that Tyrian Lannister would be a good addition to our group due to his ability to understand those around him and his capacity to learn from failure. Another member of the team suggested that Robert Langdon would help to analyse situations as well as helping to trace and resolve problems/issues. There were also a few suggestions relating to magicians, but possibly my favourite and most ingenious suggestion was to have Mother Nature on our team to ensure that we always had a suitable environment available.

There was one suggested new team member who may be able to help increase the pace of delivery – Usain Bolt. Usain Bolt is probably the greatest sprinter of all time, winning eight Olympic gold medals and having a ninth, the 4x100m relay medal from the 2008 Beijing Olympics, taken away following the positive drugs test of a team mate.

As my team were following a Scrum methodology and working to two week Sprints, having the fastest man in the world on our team could be be a significant advantage. However, how sustainable is it to keep ‘sprinting’? Over 100m or 200m Usain Bolt was rarely beaten, but his speed would not sustainable over a longer distance.

Transferring this attribute to our team, you could say that in the short term you could throw everything into a delivery, i.e. working extended hours/weekends, in order to get a user story/epic/release over the line, but this way of working is not sustainable. Eventually team members would ‘burn-out’ and there is likely to be an increase in bugs/defects and/or sickness, which would actually start to slow the team down. 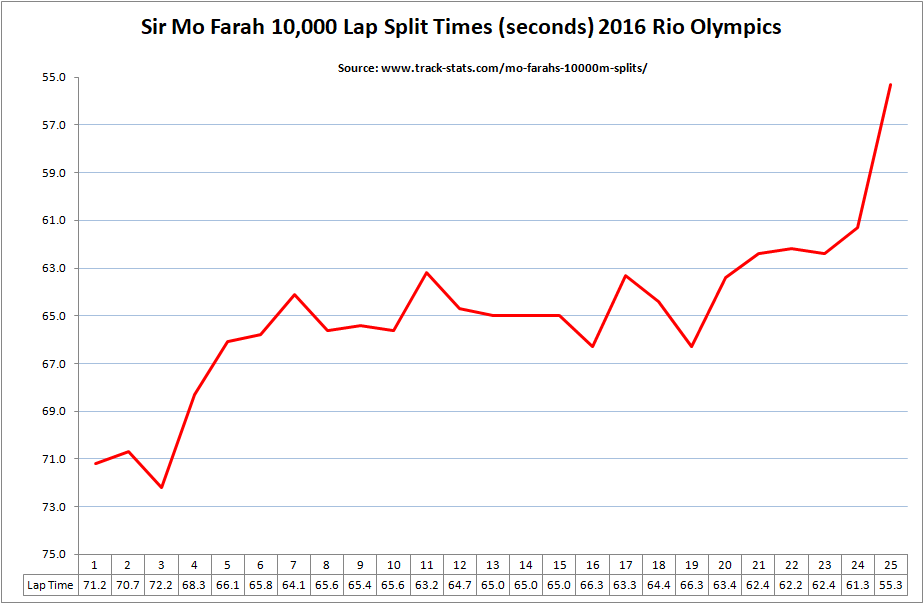 What can be seen from this chart is that at the beginning of the race the lap times were slower, with the first 4 laps fluctuating between 68.3 and 72.2 seconds. This will be because the athletes are settling themselves into the race, getting themselves to into position based on their initial race plan and identifying the athletes around them to see how they can work together to maintain a sustainable pace.

After a few laps the lap times start to become more stable, with lap times remaining between 63.2 and 66.3 second between laps 5 and 19. This stability remained, despite a fall on the 9th lap (the impact of this fall can be seen on the 100m split times). On Sir Mo’s 100m split times, there is stability after the opening laps, with 100m sprints of between 15 and 17 seconds. When Sir Mo fell, that 100m sector saw a time of 18.3 seconds followed by a faster 100m as he got himself back into position.

As the end of the race approached Sir Mo started to increase his pace. Initially this was by a small margin, but in increased dramatically in the final two laps (particularly the final lap) which resulted in him sprinting away form his fellow athletes to win the gold medal.

The pace shown in this race is similar to that of a Scrum delivery. Often the early Sprints will see a lower velocity as the team starts to find their feet and understand what they are working on and potentially how to work with each other if they are a new Scrum Team. After a few Sprint (laps) the team should start to see a stable velocity emerge. Of course there will be a few ups and downs (falls) as the team look to overcome different impediments. As a team gets closer to a release or deadline, they may find that their velocity increases as they look to complete those final few backlog items before the finish line.

So, is Sprinting really good for you? I guess it all depends on the length of race that you are running. In the short term, throwing everything into a problem/delivery can help to solve a priority incident or get things over the line. However, working that way is not sustainable and could lead to problems further down the line. Every team should look to identify and maintain their own sustainable pace. This will lead to predictability, which will help in estimating delivery windows and/or continuous delivery.

Any cookies that may not be particularly necessary for the website to function and is used specifically to collect user personal data via analytics, ads, other embedded contents are termed as non-necessary cookies. It is mandatory to procure user consent prior to running these cookies on your website.